After a few months of work, we've finally completed Spine 3.6! The focus was mainly on things that have been bugging both you and us for a while, including hundreds of small improvements to existing features and bug fixes. On top of that, we managed to add a few great new major features, see below!

For a full run-down, check out the editor changelog, as well as our brand new runtimes changelog. All the runtimes are already up to date and work with 3.6.

While the Spine Runtimes faithfully reproduce your animations in your games as you see them in the editor, it was previously only possible to review transitions in-game. In 3.6, you can now preview your animations using many of the same controls that are available to you at runtime, including modifying your setup pose and animations while the preview is running! The usefulness of seeing your animation at the same time you are editing that animation cannot be overstated.

Clipping is implemented CPU-side in all runtimes, as most engines do not support direct stencil buffer access or masking. Clipping can be a very expensive operation, especially if you use dense mesh attachments. Always check the performance of your clipped animations on your target platforms.

This makes for more powerful tinting so you get more out of your images. You can do some nice effects, like the Super Mario invincibility star flashing, solid color outlines, inverted colors, and more. It can also look nice when using additive, screen, or multiply blend modes.

Tint black is supported by all runtimes except spine-ts Canvas, spine-corona and spine-sfml due to API limitations of the respective framework/engine.

Modifying vertices in a dense mesh attachment is now considerably easier with our improved mesh manipulation tools. You can now select multiple vertices through soft selection and then scale, translate and rotate the selected vertices as a group! Feathered soft selections will apply your transforms only partially. 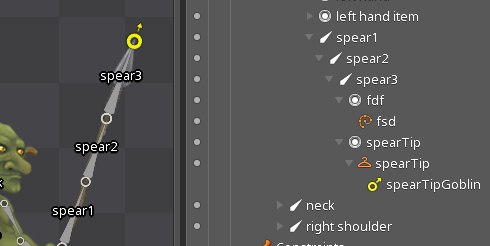 This new type of attachment is a point in space and a rotation, which is transformed by parent bones like you'd expect. It can be used to spawn particles or do anything else that involves a position and/or rotation. Point attachments have one advantage over bones: a point attachment can go in a skin, so the position and rotation can change for different skins. For example, different guns may shoot from different positions. 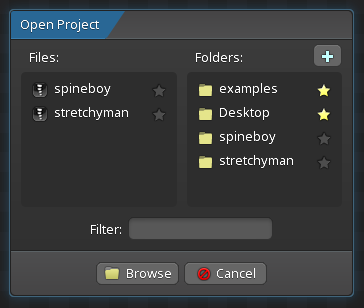 Many workflows involve working in a handful of directories. We've introduced new file dialogs that show you recently opened project files and often used directories. You can explicitly favorite a file or folder for it to show up at the top of the list. Right clicking an entry will remove it from the list. The filter box allows you to quickly filter for files by parts of their name. We've also added a few hot keys to make your file browsing even more efficient. Pressing enter will chose the most recent file or folder, pressing spacebar will immediately open the OS file dialog if you can't find the file or folder you want in your recently used lists.

AnimationState is a part of the Spine Runtimes which controls applying and queuing animations, crossfading between animations, and layering animations on top of each other. With the 3.6 release, we've vastly improved on the previous implementation, ensuring that transitions between queued animations are always smooth, without bones snapping into place. You can read more about the inner workings in our blog post AnimationState: multiple mixing without dipping.

Alongside the improvements to the Spine editor, we've also put a lot of work into making the official Spine Runtimes better!

We've added support for clipping and point attachments to all runtimes. Tint black is supported in all runtimes except spine-sfml, spine-ts canvas, and spine-corona. The tint black feature requires additional vertex attributes which these engines currently do not support.

The libGDX runtime is now also released to Maven Central. The version string is composed of the latest Spine Editor version the runtime supports, plus a patch version. The latest beta version is also continuously built and deployed to the SonaType snapshot repository.

The Cocos2d-X and Cocos2d-ObjC runtimes have seen performance gains of up to 15% by removing all per-frame allocations. We've completely rewritten the rendering infrastructure and also added mesh debug rendering support!

The Unreal Engine 4 runtime is now using the excellent RuntimeMeshComponent instead of the built-in ProceduralMeshComponent. That also means that you have to copy over the RuntimeMeshComponent plugin to your project's Plugins folder! This change was required to implement the tint black feature, for which we need custom vertex attributes. We've also ensured that the runtime works with the latest Unreal Engine 4.16.1 release. Please note that Unreal Engine 4.16 had a regression which made it impossible to compile plain .c files with MSVC++. We've submitted a PR for this issue which is now in 4.16.1!

spine-unity now supports tint black via the UV2 and UV3 vertex buffers and special tint black shaders. This capability is now shared across all Spine rendering components via the new single Spine.Unity.MeshGenerator class. You can also set the initial flip state of your skeleton in the inspector. On the Unity Editor side, we've added several improvements and tools. The biggest change you'll notice is that [SpineAttributes] now show icons in their inspector dropdown drawers so your inspectors are more readable at a glance! They can also use sibling fields as data fields so you can limit your scope within your custom serializable structs/classes (previously, it only used fields your Component class). Two new windows were also added: SkeletonDebugWindow for seeing invisible skeleton parts in Scene View and runtime debugging skeleton states, and SkeletonBakingWindow for accessing specialized baking features.

The spine-ts Canvas backend now supports shear and alpha tinting. Full color tinting is sadly not supported as the Canvas API does not expose this feature.

For a full list of changes to all runtime, check out our new runtime CHANGELOG, which details API breakage, additions, as well as new features and improvements!

Up until this release, the master branch on our spine-runtimes GitHub repository was the latest stable release you should use. Starting today, we are removing the master branch and will henceforth use branches named after major Spine versions. The latest stable version will be the default branch on GitHub, e.g. 3.6 for the current release, while development will happen in the beta branch of the next version, e.g. 3.7-beta.

If you have scripts of continuous integration builds that rely on master being the default branch, now would be a good time to update them and explicitly specify your Spine Runtime version!

With our kitchen sink release out of the way, we plan on shorter release cycles corresponding to single big features. Our roadmap for 3.7 will bring audio support, which will be available as a beta version surprisingly soon. On the runtime side, we will focus on documentation, samples, and performance improvements, as well as adding support for more engines.

Thanks to all of our users who reported issues, tested the beta, and proposed new features. We couldn't do it without you!