A transform constraint copies a bone's world rotation, translation, scale, and/or shear to one or more other bones. This has a number of clever uses for advanced rigging. The simplest is to animate a single bone and have other bones also animate. It can also be used to simulate re-parenting a bone, eg for taking off a hat, drawing a weapon, or throwing an object. Interesting effects can be created by constraining only a subset of the transform, eg only scale or shear. A bone can be positioned automatically at any percentage of the distance between two other bones, and more.

Please note that transform constraints are not available in Spine Essential. 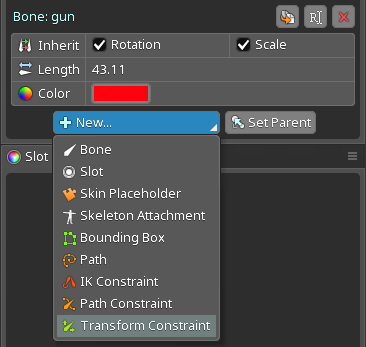 When Local is not checked and Relative is checked, flipping the target bone using negative scale can give unwanted results. For example, when scaling causes target bone to point in the opposite direction, it's world rotation is 180 degrees different than before the scaling. When using Relative, this results in the constrained bones being rotated an additional 180 degrees.

When Link sliders is checked, all the mix sliders will have the same value.

Changing any of the mix sliders in animate mode causes the key icon next to the transform constraint to turn orange. Clicking the key icon sets a key for the mixes, which are always keyed together.