Can anyone make a running animation for me?

Hello Limzee, I downloaded out of curiosity, I see there are some images but no spine file, I think you should at least attach the json to have the images correctly placed you know?
Well I was kinda bored so I tried to match them up anyway in Spine, I spotted some things you should avoid:

1. Trim the images. No, really, trim them. It looks like you drew them in that rectangular area and they're like in the top left corner, so you could also resize that area since you already did that manually, it's a bit unpractical to have them this way if you want to do cool stuff

You should try working on levels and creating your character all in one PSD file and then export it with the script for Photoshop (or GIMP or what you prefer)
2. The character could have more areas separate. This goes on preference but to me since the place where the neck is supposed to be is really "pushed back" (I understand it's a king after all) maybe the animation could get too stiff, so I'd separate the neck, the belt and the white line to keep it all nice, but that's me and it's not compulsory. Having the crown separate though could allow some cool tricks such as making the crown bounce while he runs, you know.
3. You forgot the border on his knees. You did it ok on the arms, not so ok on the legs, they both have borders so it could look a bit uglier that it has to, a trick I use is to have the lines of the upper leg on one layer behind all the leg and then its color on a layer on top of everything. (this was one of my secret ninja techniques actually)
4. His foot as it is would be better divided in two pieces, one for the front and one for the back, otherwise it won't bend nicely. (you could add meshes, but are they worth it?)

Which makes me guess you might be a newbie. It's totally ok to be new (: walks and runs were a nightmare to me too the first times with spine XD
A thing that helped me was to follow a guide such as in the image: 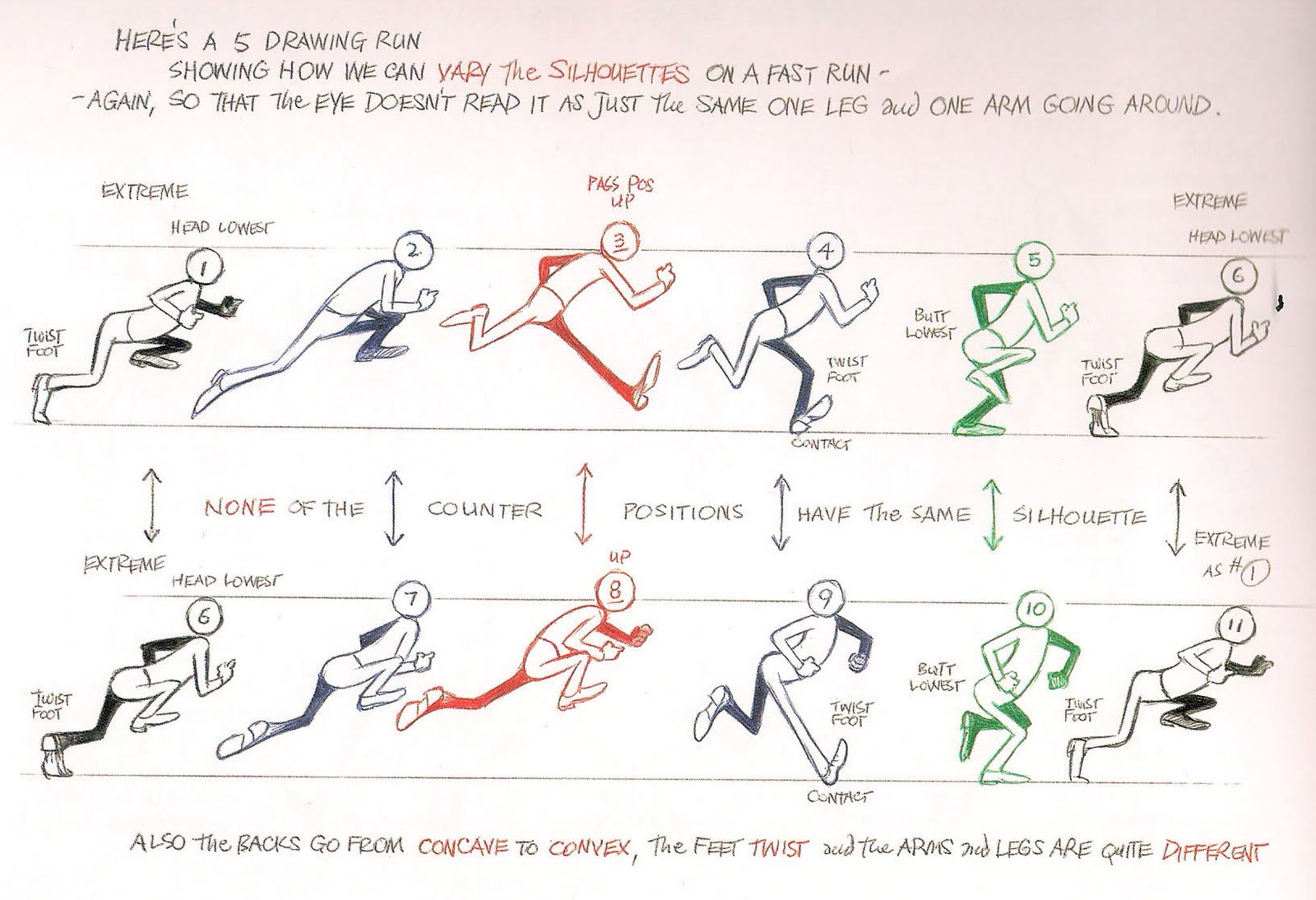 I don't mean to make it as varied as this one, but it's a big eye-opener of how a body could behave, isn't it? if you place a mesh on his body or separate the torso from the hips it could also help you achieve a similar effect.

Another thing that could help you, this time in spine, is looking at the wonderful example projects for a reference on the best practices for rigging your character and also to notice where they put their keyframes to make spineboy run.

I hope I helped you (: I'll gladly try to comment the results of your animations if you'll post them here. I probably won't animate it for you though.

Thanks for the very in depth response

I have now trimmed the images and put them together in a new spine project.
My current project Im afraid is too big to attach in a forum post here.
So now I have attached the new spine project save below, its the standard orc skin now

Well, I had a look at the file, some suggestions:
- the setup pose could be better if set in the pose it will hold longer, usually an idle position, I fixed that for you.
- if you want to do the run animation, be sure to be in animation mode. your animation had one frame and was pretty messed up, I set it up for you in order to create a 30 frames animation and I keyframmed all the bones in the initial and last position.
- the bones are not in their best positions, you'd better keep the root down at 0, 0 as that is where the character will spawn, I got it back in place for you
- the joints were missplaced. things don't turn out fine this way, you should put the bone origin in a smart place where it would be allowed to turn freely without looking broken. I did it quickly so it's a bit rough but this should give you the idea.
- oh I also colored the bones, when it starts to run things might get a bit confusing so having the limbs in different colors could be a big help.

Now then, you could try and animate this little guy

Thank you so much for the help!
This is the best i could come up with.

I guess I need some practice.
WARNING: you might need eye protection before watching.

Hello limzee, I saw your animation, mfedorov did quite a great job so I think you should download his file (:
Thanks for sharing!