I have been working on a Spine project for a while and ended up needing to update the PSD/JSON files as new art has been added to it. After exporting it using the Script PhotoshopToSpine, when I open the project in Spine the added images won't show up in the workspace. If I hover the cursor over the new images, it shows a preview of what it looks like as normal. Is there anything else I should be doing so I can work with updated assets?

Thank you for your time. 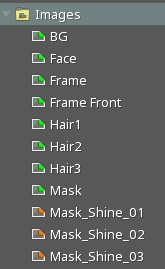 Let me make sure of your problem. Do you mean the added images won't show up in the workspace when you reimport the JSON data which is exported using PhotoshopToSpine? If so, note a point that the JSON will only write about the images that were exported at the same time. For example, if there is an image that is excluded from export because the layer is hidden, the information about that image will not be written into the JSON.

If the problem is that you can not find the added images in the Images node as you've posted a screenshot, then I guess you have too many images in the same folder, which limits the scan. By default, only the first 2,000 image files found in the image folder are shown. Uncheck Limit scanning to allow Spine to find more than 2,000 image files.
path.png
Nemaš dopuštenje za pregledavanje privit(a)ka dodan(og)ih postu.

Hi Misaki, thanks for getting back to me. I really appreciate it.

Is there a way to import the mask shine to the project without losing my animation and rigging progress? I can find the images just fine with the correct Path assgined and the JSON/Photoshop files only have 52 images; including the Mask Shine PNG sequence.

Thank you for the information! I understand your problem. Unchecking New project on the Import Data dialogue allows you to use an option Import into an existing skeleton. When it is checked, your JSON data will be imported into the chosen skeleton in the current project. Please see this page for more information:
Import - Spine User Guide: New project

Oh! That seems so obvious! I didn't notice that little check mark before. hahahaha
Thank you so much, it worked