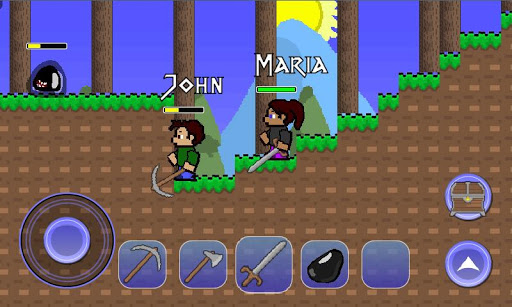 The HinterLands is a mining game, similar to Terraria or Minecraft, but created specifically for mobile devices.
The game is currently in alpha stage, and will continually be updated with additional features.

The short term goals are to include most of the mechanics from similar mining games, to provide the best experience on mobile devices. The long term goals are to add more focus on RPG elements, and to add additional multiplayer game play mods.

For Spine: I know it doesn't show off complicated animation, but I decided to use Spine early on for animation, as well as being able to re-use some of the logic from my other game for character customizations.

I originally just made the arms and legs one piece, but split it up- though it's really hard to tell with the character. I do plan on re-doing the character design and animation, and making it look a lot more smooth+detailed.

I still have to figure out some spine specific things- such as keeping the legs walking when moving+ mining (which I think I just need to remove the keys for keeping the legs in place while mining), as well as why sometimes, (using the same skeleton), if I play one animation, render, and play another, the first one affects the second one (so when one person is mining, it shows on the second person). Might just have to create separate skeletons for each player, but it's not that big of a deal right now.

Thanks again for Spine, and the run times!

That looks pretty sweet. My kids and I have had a lot of fun playing Terraria. I'm looking forward to trying this out.

Thanks!
Yeah, I really loved Terraria (and a lot of other LAN games), and would love to be able to make the game (initially) a tribute to the gameplay.

Hopefully other people like it, and I can afford to spend more time on it, but it has taken me a very long time so far.

I have no idea how they got their initial version done in 3 months!